This Photo of Hugh Jackman Gazing Fondly at Priyanka Chopra is Breaking the Internet; See Pic

Priyanka Chopra is a global sensation for a reason. She’s a style icon, a diva and a trendsetter all in one. In an addition to an impressive film career spanning 16 years, she is also known for her humanitarian efforts and as a producer. Her global fan base has also increased tremendously over the past few years.

It now looks like the Quantico star, who recently engaged with American singer Nick Jonas, has found another fan in none other than Hollywood ator Hugh Jackman. Recently, a picture of Jackman gazing fondly at Chopra surfaced on social media. Needless to say, the photo went viral in no time.

In the picture, it seems Jackman is smitten by Chopra’s grace while she interacts with the guests at the event. 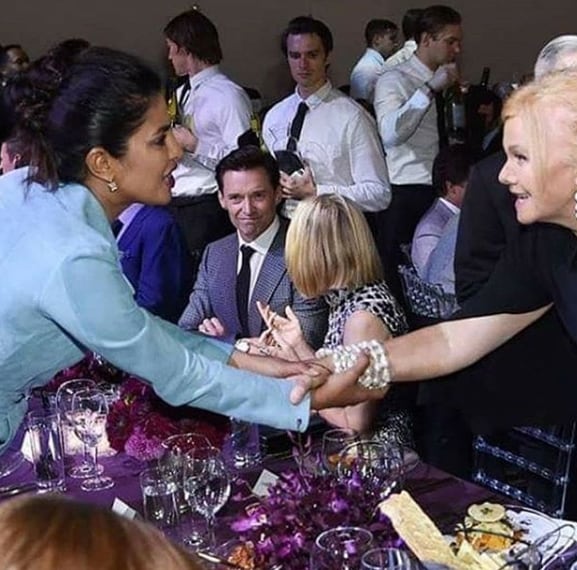 The event in question was Golden Heart Awards that Chopra attended in New York on Tuesday.

On the work front, Chopra recently wrapped up the London schedule of Shonali Bose’s The Sky Is Pink, starring Farhan Akhtar and Zaira Wasim.

Rumours of Chopra’s impending wedding with Jonas are also rife on social media. The latest reports suggest that the two may tie the knot in a traditional three day function at a heritage palace in Jodhpur, Rajasthan, next month. Their wedding will reportedly be followed by a grand bridal shower in New York.